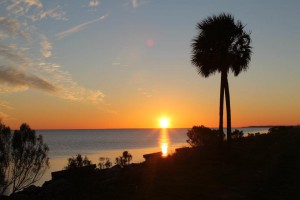 Apalachicola, Florida is Old Florida as it was meant to be. This small coastal north Florida city is at the center of Florida’s rich history.

Apalachicola was established in 1831. Shipping cotton was Apalachicola’s big industry and it soon became the third largest port on the Gulf of Mexico. By the 1850s, the waterfront was lined with brick warehouses and broad streets to handle the loading and unloading of cotton. Steamboats laden with cotton came down the River and were unloaded. Then small shallow draft schooners (lighters) shuttled the cargo to ships moored offshore.

As the railroads expanded throughout the United States, a new industry took shape in the city. Home to large cypress forests, Franklin County developed several big lumber mills in the late 1800s. Lumber magnates built many of the magnificent historic homes that line our streets.

By the end of the 19th century, oysters and seafood became an important industry. Today Franklin County harvests more than 90% of Florida’s oysters and 10% of the oysters consumed in the nation. Shrimp, blue crab and finfish are also very important commercially, bringing in over $11 million worth of seafood to Franklin County docks annually.